A Brief History of the Joker Card

Believed to have been invented by American Euchre players who, when modifying the rules sometime during the 1860s, decided that an extra trump card was required. Although some argue that the word Joker comes from Euchre, we’re positive it’s no more than a coincidence. After all, the word “joke” was already around, as was a joker, meaning one who jokes. But the concept of the Joker card itself—that definitely came from the game of Euchre.

In the 1860s, American Euchre players made up some new rules to their beloved game. These new rules required an extra trump card, which they referred to as the Best Bower, the highest trump card available. American card printers jumped onto the trend fairly quickly, soon including these extra trump cards in their decks. British manufacturers did the same by the 1880s, one British manufacturer (Chas Goodall) was manufacturing packs with Jokers for the American market in the 1870s. .

Cards to Suit all of your Needs

Promotional playing cards are a unique way for companies both large and small, to promote themselves whilst also promoting their products and services. So stand out from the crowd, separate yourself from the brochures and business cards and give your clients a handy keepsake, who doesn’t have a pack of cards at home?

How can I use promotional playing cards and why?

The History of Playing Cards

Playing Cards from the very beginning

It would be accurate to start the history of playing cards in China, this is believed to be playing cards’ origin. The idea of playing cards came from its origin, China, where it became widely popular and accepted in society. The amusement that people got from playing cards spread to Persia and India, then on to Egypt. The next place to accept playing cards was across Europe from the Iberian Peninsula and Italy, this was during the later half of 14th century. This is one of the main reasons why playing cards in Europe usually have Islamic symbols and derivation in them. 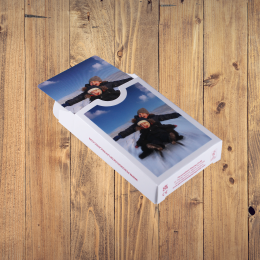 
“Packaging can be a theatre, it can create a story” – Steve Jobs

Personalised tuck boxes are the best way to keep your cards safe, plus they look fantastic! Whether its a deck of holiday cards, wedding cards or your own game.

You can, of course, order plain white boxes to keep your cards in but wouldn’t it be even better to have a custom box, designed by you?

A deck of cards is one of the greatest methods of gaming in all of time. With cards offering hours of continuous fun, what better way to spend your time than by playing cards? There’s so many different playing card games to get stuck into to. Once more, playing cards are suitable for all ages, offering fun for all the family or friend groups of any age. So, whether you’re looking for card games for kids or card games for 2, we have listed some of the most popular card games to date. Don’t worry, we’ve not forgotten about card games for adults!

Custom playing cards for your business

Our playing cards are produced to only t …Read More

With the festive season in full swing, it’s time to stand out when promoting your business. The simple business card just doesn’t cut it at Christmas parties and festive networking events! More often then not, business cards get lost, left on tables or put in the bin. If they manage to survive this, it’s very rare that anyone then follows up the contact and makes a more towards networking their business even further.

Let’s face it, we’ve all been to a wedding where the wedding favours have been a bit naff. They will either fall to the bottom of your bag, get chucked in the bin, be put in a box for all eternity (never to be seen again) or get left behind at the wedding venue. With that said, wouldn’t it be nice if there were low-cost options for wedding favours that people will not only appreciate, but actually benefit from? Well there are… and we are here to tell you about them.

If your close friend or family member hasn’t specifically requested something for their birthday or special occasion, why not choose a personalised gift? From birthdays to Father’s Day, Mother’s day to Christmas, Personalised Playing Cards have the answer.

Here at Personalised Playing Cards, we have a range of ideas to choose from with our custom playing cards. Not only do we have ideas for having personalised playing cards to suit the special situation, but what is featured on the cards too! Our top ten ideas for personalised cards are:

Playing cards have been around since we can all remember and many of us will have grown up playing games like rummy, solitaire, jacks twos and eights and many more. Some people tend to love cards so much that they’ve invested in customised playing cards of their own design. Here’s some fun facts which make these cards extra special, we’ve found seven fascinating facts that you may not have known about playing cards and their history.
…Read More
Copyright 2017 PersonalisedPlayingCards.com, All Right Reserved